Should a Christian Gamble?
by R.J. Evans

In 1931, the state of Nevada legalized most forms of gambling.  The city of Las Vegas, in particular, became the center of gambling in the U.S.  Over the course of time, it has been referred to as “Sin City,” which is not surprising.  Now, the city has developed a marketing catchphrase —  “What happens in Vegas, stays in Vegas.”  Need I say more?

Since 1931, many forms of gambling have become a thriving “vice” in America, especially casinos.  At present, Nevada and Louisiana are the only states where casino-style gambling is legal statewide.  In other states, casino-style gambling is restricted to certain small geographic areas like Atlantic City, New Jersey, the Mississippi gulf coast,  or the American Indian reservations.

I have never been to a gambling casino (and I have no desire to go to one), but I have seen enough TV commercials to get an idea of what they are like.  I find it interesting what they use to lure people in — the bright lights, the glitter, entertainment, prizes, and especially the food.  The buffet-style food is a big draw. The commercials displaying colorful scenes of appealing foods give evidence of the fact that they know they can get to people’s wallets or pocketbooks through their stomachs. In these establishments, it is as if the average person is playing against a “stacked deck.”  The “odds” are always in the casino’s favor.   Games of chance are like that — if that were not so, casinos would lose so much money they would have to go out of business.  The gambling patrons win just enough to whet their appetite to keep coming back — it is always “wait till the next time — I’m going to hit it big!”  The sad part is that a good percentage of these folks are already having financial difficulties.

At this point, we raise the question of our title: Should a Christian gamble?   To gamble is “to play games of chance for money or some other stake; to bet on an uncertain outcome.” Some reason that since the word gamble is not specifically mentioned in the Bible, then it must be okay.  Of course, there are other terms not specifically mentioned in Scripture, but are still in violation of what the Bible teaches.  Words such as “rape,” “abortion,” or “suicide” would come under the category of what is considered wrong, based upon Bible teachings and principles.

In this article, let us observe some biblical principles that are violated when someone gambles, what it can lead to, and why it is a sinful vice.  Consider the following:

Based upon the biblical teachings mentioned above, Christians need to stand firmly against all forms of  gambling.

Those who attack the authenticity of what the Bible says about creation will say that Genesis 1-11 is mythology. In other words, they say it did not really happen and it is nothing more than a fairy tale. They understand if they can convince people that it is mythology, they can destroy the credibility of the Bible and promote their man-made teaching of evolution with its billions of years.

In 1 Corinthians 11:8,12, Paul states that man was created first, then woman just as Genesis 2:18-23 states.  In 1 Timothy 2:13, Paul called Adam & Eve by name, and in Romans 5:14 he says “death reigned from Adam to Moses.”  In 1 Corinthians 15:45, Paul says, “The first man Adam became a living being.”  If Adam was only a mythological character, then everything Paul said is false.  In 2 Corinthians 11:3, Paul says, “But I fear, lest somehow, as the serpent deceived Eve by his craftiness, so your minds may be corrupted.”  I am afraid many minds have been corrupted by believing that Genesis 1-11 is nothing but a fairy tale.

The New Testament shows that the first 11 chapters of Genesis are historical and literal. In fact, there are more than 100 references in the New Testament that refer back to the first eleven chapters of Genesis. Besides this internal evidence, there is ample proof of the global flood as described by the Bible because over 100 cultures historically record a global flood. Also, the fossil record proves that every mountain on earth was covered by water. For example, marine fossils have been found high in the Himalayas, the world’s tallest mountain range. When one begins to examine the internal and external evidence of Genesis 1-11, one will be overwhelmed with proof that the Bible is true and not mythology. 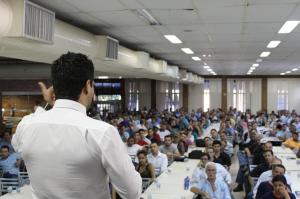 The Dreaded Task
by Richard Massey

“I found the task that I had dreaded so,
Was not so difficult when once begun;
It was the dread itself that was the foe,
And dread once conquered means a victory won”
(The Dreaded Task by Margaret E. Brown).

How true is the above statement. The first time brethren asked me to teach a Bible class (it was fifth and sixth graders), I recoiled — grimly dreading even the thought. I guess the elders were hard pressed for teachers, so my arm was twisted until I finally relented. Once I got started, however, the task became such a joy that I did not want to stop. I even enjoyed decorating the classroom with my own homemade posters. I have been teaching ever since, and enjoying every minute.

It is the “getting started” that seems to be the real hurdle. If we can get past that, the rest goes easier. Is there a hurdle between you and attendance at Bible class, or attendance on Sunday nights? Is there a hurdle for you in leading a public prayer, or inviting your neighbor to church? There are precious benefits that accompany each victory we win over dread. One result is we become a fruitful and stronger Christian. Dread makes us weak and unproductive.

Are there important things that you should be doing, but because of dread you have not accomplished them? Let me encourage you to get past the dread. Look to the Lord for strength (Ephesians 6:10-11; Philippians 4:13). Lean on your brethren for support (Galatians 6:2). Remember, it is “not so difficult when once begun.”

“…I have trusted in Your lovingkindness; My heart shall rejoice in Your salvation.  I will sing to the LORD, Because He has dealt bountifully with me” (Psalm 13:5,6).
——————–

Let those of us who are of the family of God be praying for the following people:

Dexter Roberts was diagnosed with cancer back in March 2014.  It appeared that he had been improving, but then took a turn for the worse a few weeks ago.  The cancer had been in his throat, but now has also gotten into his lymph nodes, lungs, stomach, and back.  Recently, he had radiation treatment on his back.

The catheterization Shirley Davis recently had to eliminate the blockage in her leg went well, but has left her with some pain for the time being. She is also to be very careful on that leg for a while.

Pat Joyner’s surgery last Friday for breast cancer also went well.  Probably by the end of this month, she will hear an update on her condition.

There will be a gospel meeting at the Oak Grove church of Christ in Jennings, Florida, September 6-11 with Paul Earnhart (from Louisville, Kentucky) as the guest speaker.  The church meets at 2922 NW 76th Terrace, Jennings, Florida.  Weeknight services will begin at 7:30.  For additional information, call 386-938-5047.
——————–