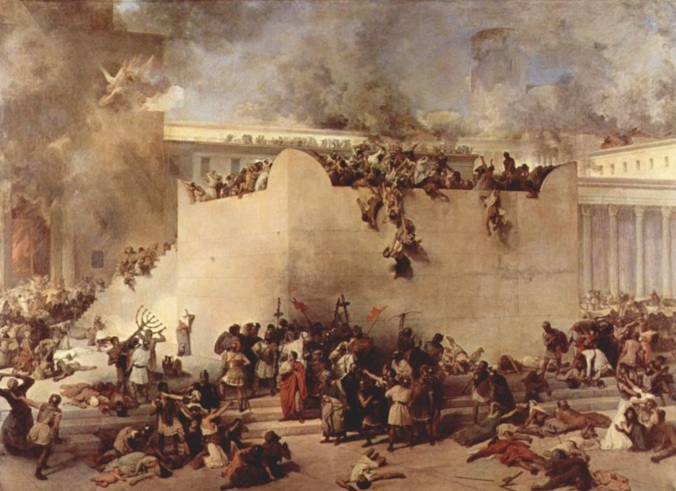 The Destruction of Jerusalem in A.D. 70
Wayne Goff

The following is an excerpt from the book, The Historical Atlas of Judaism, by Dr. Ian Barnes, regarding the destruction of Jerusalem by General Vespasian and his son, Titus, in 70 A.D.  Jesus predicted this destruction in Matthew 24:1-35. See verses 1-2, 14-22 below.

“As Vespasian was traveling to Caesarea to plan the siege of Jerusalem, Nero’s suicide was announced, so he delayed operations until the political situation in Rome became clear. In the summer of CE* 69, the armies of the Eastern Empire declared Vespasian emperor.

“Confronted by new rebel leader, Simon bar-Giora, Vespasian completed his conquest of Judaea, controlling Acrabeta, Bethel, and Ephraim, together with Hebron in the south. Only Jerusalem, Macherus, Herodium, and Masada remained defiant. Civil war raged in Jerusalem. A hill in the south-west of the city was held by aristocratic patriots while the Zealots under John of Giscala held the eastern city and most of the Temple Mount. The aristocrats asked Simon bar-Giora for help. He killed those amongst them who mentioned surrender. In Spring, CE 70, Titus marched on Jerusalem, pitched camp, and attacked the north wall, one of three defense lines. The Jews attacked the siege towers but battering-rams were finally put in place, despite the defenders using catapults they had captured from Cestius years earlier. On 25 May, the first wall was breached. Roman soldiers entered and took Bezetha, north of the Temple Mount. Five days later, the second wall was breached, but the legionaries were repelled. The second wall was breached again, leaving the walls enclosing the Temple and the upper and lower parts of the city. The city was isolated by the Romans sealing off Jerusalem from the rest of the world. Sometimes as many as 500 were crucified daily by the Romans for trying to escape the city. The inhabitants died of starvation, with the dead stacked in houses and thousands thrown over the walls into the surrounding ravines. The Fortress of Antonia was breached by battering rams on 24 July. The Temple gates were set alight and soon the Temple was burned to ashes. The rebels made a final stand in Herod’s palace but all were killed. Jerusalem was razed to the ground. Simon bar-Giora and John of Giscala were captives marching in Titus’ triumphal procession in Rome in CE 71. Bar Biora was thrown to his death from the Tarpeian Rock.”

* “CE” means common era,” a term often used by those who do not wish to acknowledge the term “A.D.” which comes from the Latin anno domini which means “In the year of our Lord.”

“Then Jesus went out and departed from the temple, and His disciples came up to show Him the buildings of the temple. And Jesus said to them, ‘Do you not see all these things? Assuredly, I say to you, not one stone shall be left here upon another, that shall not be thrown down.’…

“And this gospel of the kingdom will be preached in all the world as a witness to all the nations, and then the end will come.

“Therefore when you see the ‘abomination of desolation,’ spoken of by Daniel the prophet, standing in the holy place’ (whoever reads, let him understand), ‘then let those who are in Judea flee to the mountains. Let him who is on the housetop not go down to take anything out of his house. And let him who is in the field not go back to get his clothes. But woe to those who are pregnant and to those who are nursing babies in those days! And pray that your flight may not be in winter or on the Sabbath. For then there will be great tribulation, such as has not been since the beginning of the world until this time, no, nor ever shall be. And unless those days were shortened, no flesh would be saved; but for the elect’s sake those days will be shortened.” ~ Matthew 24:1–2, 14–22

Jesus’ description in Matthew 24 of the Destruction of Jerusalem is consistently misapplied to a future “tribulation” period imagined by those who profess to believe in a future, earthly reign of Jesus on the earth for a thousand years. But note Matt. 24:34.

“Truly I say to you, this generation will not pass away until all these things take place” (Matthew  24:34, NASB).

“When He approached Jerusalem, He saw the city and wept over it, saying, ‘If you had known in this day, even you, the things which make for peace! But now they have been hidden from your eyes. For the days will come upon you when your enemies will throw up a barricade against you, and surround you and hem you in on every side, and they will level you to the ground and your children within you, and they will not leave in you one stone upon another, because you did not recognize the time of your visitation’” (Luke 19:41-44, NASB).

“O Jerusalem, Jerusalem, the one who kills the prophets and stones those who are sent to her! How often I wanted to gather your children together, as a hen gathers her brood under her wings, but you were not willing!” (Luke 13:34, NKJV).
——————-

A person between the ages of 20-30 has about 615 hair follicles per square centimeter. A person 50 years of age has around 485 hair follicles per square centimeter. Typically, most people have somewhere between 100,000-150,000 hairs on their head. By the way, the average hair loss for an individual is 50-100 hairs per day. As a result, there is no way you can tell accurately how many hairs you have (in fact, unless you are going bald, most of us don’t really care). But God knows.

Jesus said: “Are not two sparrows sold for a cent? And yet not one of them will fall to the ground apart from your Father. But the very hairs of your head are all numbered. Therefore do not fear; you are of more value than many sparrows” (Matt. 10:29-31). This passage reveals three interesting truths.

God is a God of detail. How insignificant are hairs and sparrows to us. Yet God is aware of them. He is a God of details. The motives, attitudes and heart behind our actions are as important to Him as the actions themselves. It does little good to give, if you have left out the detail of being a cheerful giver. Singing fails if we neglect thankfulness in our heart. Let us be a people of details, as God is.

God cares about you. This is why Jesus referred to sparrows and hair. We are of value to Him. Christ was not sent to save the whales, the environment, or the endangered species, but mankind. Man has value! Stress and worry often make us wonder if God cares. These two simple illustrations remind us that He does.

Folks to continue to remember in our prayers:

Kelly Stoneheart, Keith’s wife, who recently had a double mastectomy and reconstruction surgery.

Shirley Davis  now has just another week of rehabilitation treatments which are given in her home twice a week.  Her arthritis in her knee and back have been giving her trouble.

Ronnie Davis who had a recent fall.

Many of the Bartlett family had come down with sicknesses while spending the holiday in Tampa with numerous family members.

Bennie Medlock, who has been in much pain due to loss of cartilage and bone rubbing against bone in his knee.

A.J. & Pat Joyner are not doing well and would like our prayers.