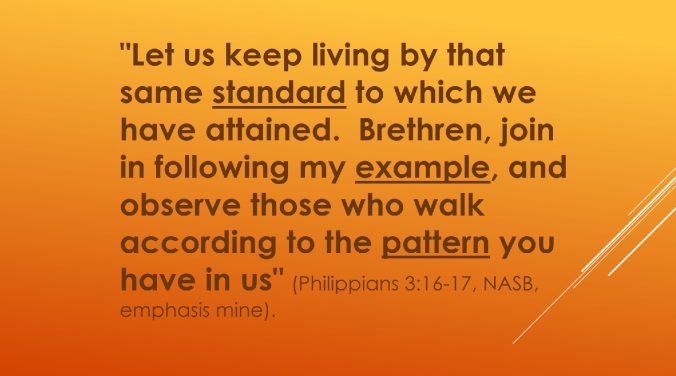 In the lessons we have studied so far, we have seen God create a world and then destroy it when it no longer suited His purpose. We have also seen God make demands of His creation, such as the law for Adam and Eve not to eat of a certain tree or the instructions to Noah to build a vessel according to a very specific plan. It should be obvious that God expects obedience from mankind. We could say that God has the right to be obeyed.

I have a small car. It isn’t much, but it gets me around town. I can drive it wherever I desire. If I decide to get rid of it, I can dispose of it in a variety of ways. Why can I do all these things with my car? Because I own it.

The reason God can make laws for his world and destroy it if he sees fit is because God owns our world. In Genesis 1:1 we learned that the only reason this world exists is because God created it from nothing by the power of His Word. Therefore, other passages in the Bible speak of the world as belonging to God, such as Psalm 24:1-2. Even though we would like to think of ourselves as free and independent beings, we too belong to God. We read in Genesis 1:26, that God made man in his own image. He gave us a spirit that the rest of his creation on earth does not have. Since our spirits come from God, God can claim that all souls belong to him (Ezekiel 18:4).

God also has a right to expect obedience from us because we were created to serve him. Solomon, after studying all the possible reasons for mankind’s existence, concluded that the whole duty of man is to serve his Creator (Ecclesiastes 12:13). When we must make a choice between serving a man on this earth or serving God, the answer is obvious. It is more important to serve God (Acts 5:29). Who are we to argue otherwise with the Creator of this universe? (See Job 38:1-41.)

Another important reason for mankind to obey God is the simple fact that man cannot find his own way. We do not leave small children alone to fend for themselves. We understand that with their limited knowledge and capability that they will soon come to harm. Compared to God, we are all infants. Unless God directs our way, our lives become useless (Psalms 127:1). People are unable to accurately choose to take the best path (Proverbs 14:12).

While we understand the right of God to ask for obedience from us, can we also say that God is asserting his right? In other words, does God expect us to be obedient? Even in the few chapters that we have read so far, it is obvious that God expects to be obeyed. The Bible is filled with such illustrations. King Saul was given a very specific command in I Samuel 15:2-3. He was to wipe out a nation to fulfill a punishment that God had promised would come a number of generations earlier. Saul chose to obey God’s commands in his own way. As a result, God took the right of Saul’s children to inherit the kingship away from Saul (I Samuel 15:9-11). Even though Saul justified his disobedience by claiming to use it as a way of worshiping God, we learn that obedience is more important than making up ways to worship God (I Samuel 15:22-23).

In the New Testament, Jesus Christ holds all the authority of the Godhead (Matthew 28:18). Everything has been placed at Jesus’ feet, to be used or disposed of as Jesus sees fit (Ephesians 1:21-22; Colossians 2:10; I Peter 3:22). If we wish to please God, the Father, we must do it Jesus’ way (John 14:6). If we truly love our Lord and Savior, then we will obey the things that Jesus has commanded of us (John 14:15). And it is not just those things that Jesus has directly commanded that we must obey. Jesus appointed the apostles to represent him after his death (Matthew 28:19-20). As they teach the Master’s words, so we must follow their directions.

Occasionally, you run across people who claim that God only expects us to follow his direct commands. The examples of what Christians did during the first century are only considered to be suggestions, but not requirements. There are many things that we practice that are only based on examples recorded in the Bible. Our meeting on the first day of the week to partake of the Lord’s Supper is based on the practice of the first century Christians (Acts 20:7, I Corinthians 11:17-34). The taking up of a collection on the first day of the week is also based on an example (I Corinthians 16:1-2). Does this mean that we can meet and partake of the Lord’s Supper on days other than Sunday? Is taking up a collection optional for congregations?

One thing that people miss is that we are commanded to follow the good examples recorded in the Scriptures. In I Corinthians 11:1, Paul commands us to imitate his life as he imitates Christ. To the Philippians, Paul says to do the things we have learned, heard, and seen (Philippians 4:9). When the apostles or preachers set the proper example, we need to follow those examples (II Thessalonians 3:7). In Philippians 3:17, we are told to follow Paul and those who follow the same path he took.

However, we can learn from the Scriptures that God expects even more from us than just to follow his commandments and the examples of his children. Sometimes we have to follow rules that we can only derive by implication. Consider this, when Noah built the ark, he was told the kind of material to use and the size of ark to build. However, God never said what type of tools Noah should use in building the ark. Does this mean Noah did not use any tools? Of course not! The command to build the ark implies Noah had permission to use tools.

We are used to deriving implications from the facts we are given. For example, we know that Peter had a wife because Jesus healed his mother-in-law (Mark 1:30). Similarly, we practice things that are based on implication. We use grape juice and unleavened bread for the Lord’s Supper. The reason for grape juice is that Jesus used the fruit of the vine during his last supper. The vine that every Jew would think about is grape, so we use grape juice. The bread that Jesus used would have had to be unleavened since he ate the last supper during the Passover festival when leavening was not permitted in the home. As a result, it would be wrong to substitute the juice of another fruit, such as watermelons. Nor would yeast-risen bread be an acceptable substitute for unleavened bread.

In Acts 15:4-19, we have an example of the disciples settling a difficult problem by drawing a conclusion from the evidence that God had presented. The problem was deciding whether Gentile believers had to follow at least some of the Jewish practices, such as circumcision, to be a Christian. The reason this came up was because the first Christians were Jews and many behaved as if Christianity was a branch of Judaism. To solve this problem, the disciples cited the command of God to send Peter to a Gentile. They also noted that prophecies in the Old Law stated that the Gentiles would become God’s children. They also cited the example of the Holy Spirit coming to the Gentiles that Peter taught without them being circumcised. They also cited the miracles that Paul and Barnabas did among the Gentiles. From all this evidence, they drew the conclusion that God did not want the Gentiles to keep the law of Moses. Their conclusion was not directly stated anywhere in the Scriptures. You can only make this conclusion by inference.

God does expect men to make the proper conclusions from the things he does and does not say. We will use an event from Moses’ life to illustrate this point. In Numbers 20:1-12, the people of Israel were complaining once again that they did not have enough water. God told Moses to take Aaron’s rod and speak to a certain rock and water would come forth. As you read the account, notice that Moses did do what God commanded. He did speak to the rock, but God punished Moses for his disobedience. So, what did Moses do wrong? First, Moses struck the rock with Aaron’s rod in addition to speaking to the rock. I can understand why Moses did strike the rock, after all God told him to take Aaron’s rod with him and a while back, when the people wanted water at an earlier time, God told Moses to strike the rock to bring forth the water. However, in this case, God did not say to strike the rock. God said that Moses did not trust God. Moses felt he had to do more than God had commanded. The second mistake that Moses made was that he did not give God credit for bringing water. Moses asked, “Must we bring forth water?” He should have asked, “Must God bring forth water?” Moses did not have anything to do with the granting of water. He was simply God’s spokesman.

Serving God should be taken seriously. We must be careful to do exactly as God has commanded. God has the right to expect obedience from his creation. It is our duty to serve him to the best of our abilities.

Folks to be praying for:

We extend our condolences to the family and friends of Katryna Brinkley Hayes who passed away November 24, after being fatally injured in a vehicle accident.

Frankie Hadley was admitted to the Jesup hospital last Tuesday, due to a bad UTI and another issue.  She returned home Saturday very weak and has pain in her back when moving.

It was good to see Myrna Jordan back with us last week, after her going through much trouble with shingles.