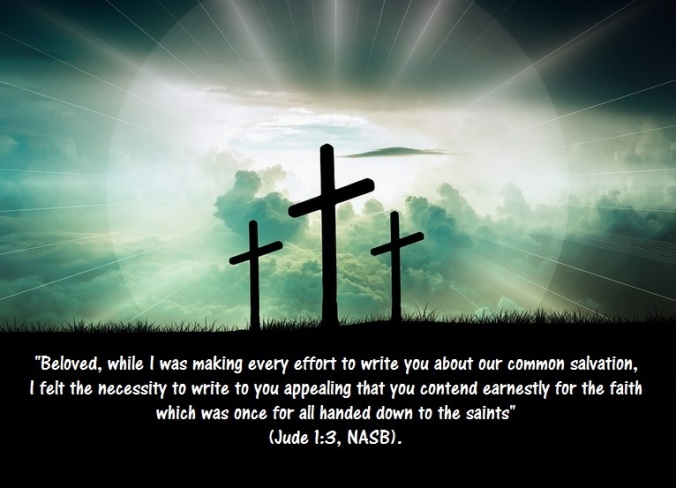 Though we often think of the word “common” to refer to that which is ordinary, usual, frequent, or unexceptional, it also has the meaning of “shared equally.” And it is this latter definition that applies to Jude’s mention of “our common salvation” (Jude 1:3). For it is the one plan of redemption that is to be accepted by all people of every race, nation, and social status.

Throughout the history of the world, only one sacrifice has been able to atone for the sins of mankind; and that was the propitiatory sacrifice of Jesus Christ Himself, which was made for every transgressor — whether of the past, of that present time, or of any time yet to come.  Jesus accomplished what all the millions of Old Testament sacrifices had not been able to do. For they could not blot out even one sin (cf. Heb. 10:4). But that is certainly not the case with the atonement Jesus made by His death at Calvary. For “Every priest stands daily ministering and offering time after time the same sacrifices, which can never take away sins; but He, having offered one sacrifice for sins for all time, SAT DOWN AT THE RIGHT HAND OF GOD, waiting from that time onward UNTIL HIS ENEMIES BE MADE A FOOTSTOOL FOR HIS FEET. For by one offering He has perfected for all time those who are sanctified” (vv. 11-14).  Yes, Jesus came to this world, taking on a human body, “…so that by the grace of God He might taste death for EVERYONE” (Heb. 2:9, emphasis mine).

Though we live in a world that is filled with various kinds of faiths (doctrines, beliefs, creeds), yet the Bible speaks of just one that we are to “contend earnestly for”; and it is “the faith which was once for all handed down to the saints” (Jude 1:3). Paul also shows the oneness of that faith when pointing out that just as there is only “one body,” “one Spirit,” “one hope,” “one Lord,” “one baptism,” and “one God,” even so, there is just “one faith” (Eph. 4:4-6).  This faith is the gospel — for it can be obeyed: As Luke writes, “The word of God kept on spreading; and the number of disciples continued to increase greatly in Jerusalem, and a great many of the priests were becoming obedient TO THE FAITH” (Acts 6:7, emphasis mine).  So the oneness of that faith is seen in the oneness of the gospel, and that is something that is not to be swapped for another.  Concerning that, Paul warns: “I am amazed that you are so quickly deserting Him who called you by the grace of Christ, for a different gospel; which is really not another; only there are some who are disturbing you and want to distort the gospel of Christ.  But even if we, or an angel from heaven, should preach to you a gospel contrary to what we have preached to you, he is to be accursed!” (Gal. 1:6-9).  The gospel shows what one must believe and how to obtain salvation.  And these words of Jesus very well apply to it, that “the way is narrow that leads to life, and there are few who find it” (Matt. 7:14).  Note, too, that He speaks of this as “the way” — and not as “the ways.”  For salvation in this Gospel Age is not of different ways for different people; but, rather, it is that one common way for all.

Enjoyed in a Common Body

The church is not the Savior. It is the saved! And one must, therefore, be in the church in order to have that salvation. This automatically happens when one becomes a Christian. For God Himself then adds that one to that universal body of redeemed people.  As an example of this, concerning the many who were becoming Christians in Jerusalem, “…the Lord added to the church daily those who were being saved” (Acts 2:47).  So it is God who adds the Christian to the universal church — but each redeemed person is to also become a member of a local congregation in order to work and worship together with the brethren there. That, therefore, pertains to our responsibility.  For it is not in the universal church, but in the local congregation in which we carry out the specific activities that God has instructed just the congregation to do.

The only plurality of churches in the New Testament is with regard to various congregations, but all adhering to the common faith. For there were no denominations at that time.

Many people in our day put little emphasis — or none at all — on the church, its importance, and the need to be a part of it. Perhaps they have been disillusioned by the differing bodies of denominationalism, the religious confusion of conflicting beliefs and practices in the world today, and the wrongful things that have been carried out that bring reproach upon the Lord and the church.  For how often do people stereotype individuals, thus viewing others in the same negative light or as equally guilty — and even toward those who are serving and worshiping God correctly?  But the wrong of others should not deter us from doing what is right and striving to please the Lord by worshiping and serving Him in the way in which His word teaches — and even if we are being misrepresented. For God wants His people to worship and serve Him, and we are warned about “not forsaking our own assembling together, as is the habit of some, but encouraging one another; and all the more as you see the day drawing near. For if we go on sinning willfully after receiving the knowledge of the truth, there no longer remains a sacrifice for sins, but a terrifying expectation of judgment and THE FURY OF A FIRE WHICH WILL CONSUME THE ADVERSARIES” (Heb. 10:25-27).

The very fact that Jesus had to suffer and die in order that there could even be a church — for it was “purchased with His own blood” (Acts 20:28) — should also help us realize the importance of it.  For how can we minimize that which was obtained at such a great cost?!

The common salvation is based on the common authority in God’s word. Paul exhorted the Corinthians toward this, when instructing, “Now I exhort you, brethren, by the name of our Lord Jesus Christ, that you all agree, and there be no divisions among you, but you be made complete in the same mind and in the same judgment” (1 Cor. 1:10). It is only through God’s word that Scriptural unity can be attained.  So it was what Paul taught “everywhere in every church” (1 Cor. 4:17).

Paul speaks of those Gentiles who prior to their conversion were “separate from Christ… having no hope and without God in the world” (Eph. 2:12). But what a blessing and great hope had come to them when becoming Christians! “For in hope we have been saved, but hope that is seen is not hope; for why does one also hope for what he sees? But if we hope for what we do not see, with perseverance we wait eagerly for it” (Rom. 8:24-25). This common hope goes way beyond any kind of worldly hope.

The hope that God instills has been defined as “desire plus expectation” (which is based on God’s word). The need for both has been illustrated by the young boy who desired to make good grades – but he did not expect them. Then after seeing his report card and on his way home, he did not desire to receive a spanking – but he expected it! In neither case, did this poor, young fellow have hope.

Some have attributed to Shakespeare that “We are never beneath hope, while above hell; nor above hope, while beneath heaven.”

Having the hope of eternal life is a beautiful and helpful possession.  For no matter how much we enjoy our lives on earth, we also know (by our faith and hope) that the best is yet to come!

Our common salvation is far from being common in the sense of ordinary, usual, or unexceptional. Rather, what could be greater, more life-changing, more needful, and more of a reason to be thankful than in having this wonderful salvation that God has made possible for every sinner through His Son Jesus Christ!  For to simply be forgiven by God and to become His child is not just of great worth, but that which is of infinite and eternal value!

So may all come to Jesus, through obedience to His salvation plan.  For “there is salvation in no one else; for there is no other name under heaven that has been given among men by which we must be saved” (Acts 4:12).  And Jesus declares, “I am the way, and the truth, and the life; no one comes to the Father but through Me.”

(All Scripture from the NASB.)

People to be praying for:

Cedell Fletcher has been back in the hospital.  He has been having trouble with a blood disorder for many years.

Let us also continue to remember in prayer the family and friends of those who have recently departed: Brock McCorvey, Cambria Jade Shuman, and James “Buddy” Gornto.

Frankie Hadley is still at the Baptist Village nursing home.