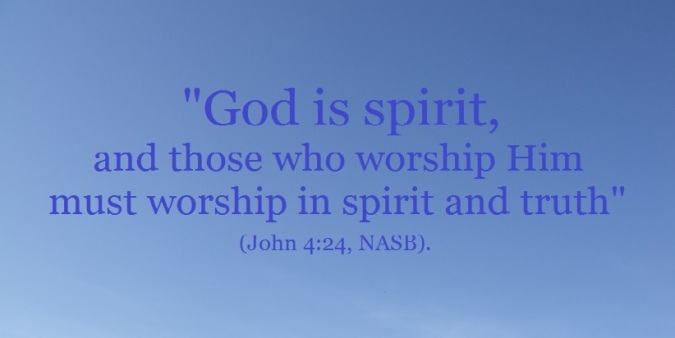 In recent years, Christians concerned about the danger of becoming sluggish (Heb. 6:11-12), losing their first love (Rev. 2:4-5), or falling into lukewarmness (Rev. 3:15-16) have suggested some radical changes to the collective worship of the local church. Books such as Spilt Grape Juice by Mike Root and Radical Restoration by F. LaGard Smith, along with concepts borrowed from various evangelicals and community church leaders, have had a great impact in a number of places.

In his influential book in which he pushed for radical change, Smith utilized manufactured quotes such as “Not Ritual, but spiritual” and “Not Rules, but righteousness” and attributed them to Jesus (Radical Restoration, p. 22). Some have lampooned their fellow-saints with somewhat humorous statements such as, “Though we sing about ‘standing on the promises,’ we’re really just ‘sitting on the premises.’”  When you add to this the legitimate concerns about complacency among Christians, in many locales a climate necessary to introduce significant change has been established.

What kind of changes are we speaking of? Instead of sitting in rows that face the front, we are urged to turn and face one another in a circle as we sing. It may be suggested that “the mausoleum-like meetinghouse” is holding us back, so we should seek a park in which, in the presence of God’s glorious creation, we may be revived. To make the Lord’s Supper more relevant and meaningful we may be urged to dim the lights or increase the portion sizes of the bread and fruit of the vine. Some have suggested that we would be helped in our observance of the Lord’s Supper by turning to our neighbors and sharing with them our testimony about what the death of Jesus has meant in our lives.

While we should be genuinely concerned about sluggishness and complacency, is the solution really found in these things? Will these genuinely revive our zeal? The truth is that Smith was absolutely correct when he warned that we must not be “quick-fix artists who deal only with the symptoms of our malaise, not the root causes” (Radical Restoration, p. 39). I believe he was also right to say that we must “plunge ourselves with abandon into truly being his people” (Radical Restoration, p. 108)! However, what Smith has ended up doing and what is being proposed by an increasing number of brethren is exactly what Smith warned against doing. When problems of sluggishness and complacency do exist, these are problems of the heart, while the answers being proposed are simply quick-fix, external “solutions” to internal issues.

Read Eph. 5:18-19 and Col. 3:16 carefully and take note of what is said about the externals such as seating, direction we look, etc. Instead of these things which are not mentioned at all, what did the Holy Spirit emphasize? Acceptable worship results from allowing the word to dwell richly in one and making a melody in the thankful heart. While there is nothing inherently wrong with being in a circle, how does that fix the problem if the word of Christ is not dwelling richly in a person? Does looking at other people really instill the necessary grace or thankfulness (ESV and NASB) toward God in our hearts?

While God can be worshiped in a park (John 4:21-24), if the only times we can fully appreciate the greatness and goodness of God are when we are outside enjoying His creation, have we not lost focus? In reality, have we not become focused on self and the things we enjoy rather than on the Almighty who is to be served?

If we read the accounts of Jesus establishing the Lord’s Supper in Matt. 26, Mark 14, Luke 22, and 1 Cor. 11, what do we learn about the size of the portions to be consumed? Obviously, the answer is nothing, since not a single word is said about it. The amounts of bread and grape juice to be consumed are incidental or we would have been given some instruction in this matter. So, instead of external incidentals, the focus is on our mindset — “in remembrance …. let a man examine himself” (1 Cor. 11:23-29). If we reach the point that it takes dimmed lights and soft music in the background for us to remember the crucifixion of our Lord, it is time to seriously examine ourselves.

But what of the idea that while we are eating the Lord’s Supper, instead of quietly reflecting on the death of Jesus, we need to share with others what that death has meant to us? First, if we read the instructions found in Scripture we find nothing even remotely suggesting the practice. Second, would not my church neighbor be better off considering the inspired testimony of New Testament writers instead of hearing about my subjective experiences? Third, do we not see the potential for confusion when people all over the building (or park) are talking at the same time, even if they are trying to keep their voices down? Wasn’t this addressed in 1 Cor. 14:26-33? Fourth, by what Scriptural authority would women speak during the Lord’s Supper (1 Cor. 14:34-35)?

Anyone who sees anything in this article as a defense of complacency or lukewarmness will have completely missed the point, for there is no excuse for that. But nowhere in Scripture do we find even a hint that one involved in heartfelt singing with others; quietly reflecting on the Lord’s death; studying God’s word by listening to a teacher; listening so as to be able to say amen to a prayer; et al is being a passive spectator who is merely sitting on the premises. It may not be exciting and exhilarating to some, but it’s what the Bible calls worship.

Certainly there are times when complacency sets in and spiritual renewal is necessary, but the need in such times is for greater internal reflection and not more external manipulation. In such times we need to thoughtfully consider what God has done for us and then obey from the heart. The instructions to “Rejoice always, pray without ceasing, in everything give thanks, for this is the will of God in Christ Jesus for you” (1 Thes. 5:16-18) are to be obeyed and can be obeyed no matter the seating arrangements or the size of the container for the fruit of the vine. When with the rational mind we more deeply appreciate what it means to be in Christ and living with the hope of heaven, then all the externals that some seem so determined to change, even at the cost of dividing brethren, will seem insignificant.

What do you do when you see a fellow Christian make a mistake?  It may be a simple error of judgment, or it could be a more serious blunder – a sin that can potentially send his soul into eternal hell.  What will you do?

Actually there are several options open to you. You could ignore the situation totally. Or you might, in your own mind, ridicule his foolishness.  If you’re a little bolder, you could gossip with others about his error — belittling him as  you do so.  You see, there are a number of things you could do.

But, of course, there is only one thing you should do — there is only one God-ordained course of action.  “He which converteth the sinner from the error of his way shall save a soul from death, and shall hide a multitude of sins” (James 5:20).  “Brethren, if a man be overtaken in a fault, ye which are spiritual, restore such an one in the spirit of meekness, considering thyself, lest thou also be tempted” (Galatians 6:1).

The fact is that we all need the help, encouragement and strengthening that comes from our brethren.  Sadly, too often we do things that hinder rather than help our brother when he is down.

The next time you are confronted with such a situation, remember that — if you want to please God — your choice is already made. If your brother has made a mistake, there can be no ignoring of the problem, no backbiting gossip, no thoughts of ridicule or humiliation. Go to your brother with the help he needs.  Don’t forget that you are certain to need this kind of help in the future, too!

For those who can pray, let us be remembering the following in prayer:

Lexi Crawford, who is only 16, was diagnosed June 2015 with  RMS (Rhabdomyosarcoma).  Last January, it has again metastasized into her bones.

After being in the hospital since last Monday, Misty Thornton returned home Friday; but she will be having further testing this week.

Though still on oral chemo, Kay Byars’ recent checkup led to some concern.  So she will soon be having a scan performed to better diagnose her condition.

Tanya Terrones had served for 23 years with the military police in such places as Afghanistan, Iraq, Korea, Panama, and had also been to Italy, Egypt, and Thailand.  In the last several years of that time, she had also specialized in domestic violence cases in Washington state.  Migraines for her began in 1998, two weeks after having been inoculated with an anthrax vaccine.  Then in 2004, while serving in Iraq, she was involved in two explosions caused by their vehicle running over an IED, during her war-time tours.  One of those explosions led to a traumatic brain injury.  Since then, her migraines have increased to about 3 to 5 per week.  Due to one of those frequent migraines, she had to cancel both her medical appointments last week that would have involved an MRI and a brain scan.  Rescheduling was made for both.

Penny Medlock had not been doing well, which required seeing her doctor about a change or increase in her medication.