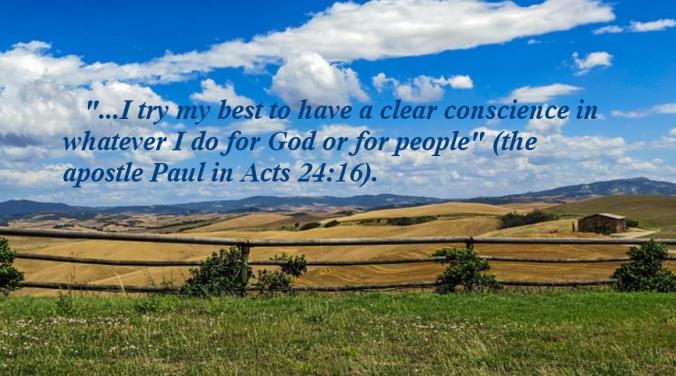 While standing trial before Felix, the apostle Paul stated that he had strived to live with a pure conscience before God and men (Acts 24:16). This should be the goal of each and every child of God — living life with a pure conscience (I Timothy 1:5,19). The conscience can be a valuable tool for the Christian which gives personal insight into one’s own actions, thoughts and desires.

While the conscience is not authoritative, binding or infallible it can be helpful. Although your conscience can be mistaken — no matter the amount of sincerity shown in any practice — it can be a good gauge of one’s spiritual status before God and before men.

The Conscience Is a Witness

The term conscience is defined as co-knowledge with oneself. The conscience shares information with yourself by processing your innermost thoughts, feelings, emotions and desires. The conscience is able to provide helpful insight into why you are involved in certain activities or why you react in certain ways to particular events. It serves as a self-witness.

The conscience can be a witness defending our actions (Romans 2:15). The apostle Paul said that he had served God with a clear conscience all of his life even while persecuting Christians (Acts 23:1). Paul’s conscience defended his actions. Paul was convinced he was doing what God wanted him to do by killing Christians. Therein lies the key to keeping a pure conscience: performing the will of God. Now we see in Paul’s case that his conscience was wrong. However, we must teach ourselves what is pleasing to God in order to keep a pure conscience for we will be judged based on the gospel of Jesus Christ (Romans 2:16). We cannot determine practice just because we like an activity, or we think it is right. We must study God’s word and allow that to be the judging factor.

The conscience can also testify against us, accusing us of guilt (Romans 2:15). When our conscience is telling us we are guilty of some sin we must eradicate that sin. Ignoring a guilt-bearing conscience can cause worry, anxiety, festering, turmoil, distress, grief and anger — none of which are profitable emotions. Far too often we ignore these feelings, or we turn to encouraging books, or complain that we don’t get enough encouragement from the preacher, etc. What people need to do is repent.

The Conscience Is a Weapon

The term justification is a legal term which means to be free of any guilt. The result of justification is peace with God (Romans 5:1). Yet this peace can be disrupted by the piercing weapon that the conscience is. Eliphaz described the conscience as “sounds of terror” in one’s ears and destroying the peace that one enjoys (Job 15:21), which results in distress, anguish and fear (Job 15:24). What caused the turmoil and fear? Transgressing the commandment of the Lord (Job 15:25). The conscience is unsheathed when we sin against God Almighty!

The target of this weapon is the heart. The conscience is used to convict and bring a knowledge of sin. That conviction of sin should lead one to repent (Acts 2:37-38). When the weapon has been used and cuts at the heart it arouses the feeling of guilt. What is the purpose of the guilt one may feel? It is there to make you repent! That is the purpose guilt has. Do not ignore the guilt-bearing conscience.

The Conscience Is a Warning System

The conscience is intended to sound an alarm when it has been harmed. The conscience is supposed to be sensitive to sin. In order for the conscience to be sensitive to sin it must first know what sin is. We must educate ourselves concerning the law of God. If we do not read, understand and apply God’s law then how can we expect to know what sin is? All sin must be defined and shown to be transgression through the Scriptures. We cannot quit preaching against sin to soothe our conscience because then we will have untrained consciences that will be given over to sin. Danger also lies when we become associated with sin, causing one to become desensitized resulting in indifference (I Timothy 4:1-2). Indifference will ultimately lead to approval of sinful activities. Paul warned the Gentiles of judgment for approving sinful activities with no differentiation between slanderers, gossips, haters of God and murderers (Romans 1:32). Thus, the warnings to flee and abhor sin and cleave to what is good (Romans 12:9).

When we find ourselves in situations that cause us to feel uncomfortable, then our conscience is telling us to flee! However, if we ignore our conscience we run the risk of losing any sensitivity we may have to sin.

Pharaoh allowed his heart to be hardened because he ignored God’s glory (Exodus 7:1,3), refused to believe in God (Exodus 7:13), and was impenitent (Exodus 9:27,35). There is great danger in ignoring the cries of our guilty conscience.

The Conscience Can Be Made Whole

By following these five steps we will strengthen our conscience, our knowledge and our faith. Repentance is necessary to keeping a pure conscience.1

Keeping a pure conscience is vital to each Christian’s faith (Romans 14:22-23). Knowing that we have maintained a pure conscience, we may be confident when we appear before the judgment seat of God, knowing that there is laid up for ourselves a crown of righteousness (II Timothy 4:7,8).

1. The five steps in order to keep a pure conscience was borrowed from John MacArthur’s book, “The Vanishing Conscience.”

“Finally, be strong in the Lord and in the strength of his might. Put on the whole armor of God, that you may be able to stand against the schemes of the devil. For we do not wrestle against flesh and blood, but against the rulers, against the authorities, against the cosmic powers over this present darkness, against the spiritual forces of evil in the heavenly places.”
——————–

On November 6, Shirley Davis had fallen while at the hospital.  She was going there for her first antibiotic treatment to be received through an IV, which was needful for an infection in her toe.  In falling, the right side of her face hit the wall, putting a gash near her eye and badly bruising her face.  Her right arm was also bruised, and though the soreness from these injuries have subsided; the pain in her left hip, which she also landed on, continues about the same as initially; and pain pills do not give her much relief.  She is now housebound, but receives her IV there and will continue to do so about an hour a day for six weeks, until December 14.

Let us also continue to remember Danielle Howard in prayer as she is in the process of having a blood clot dissolved in her jugular vein.  She is now no longer in the hospital for that, but she is returning regularly and will continue to do so for a few more weeks, due to her recent kidney transplant.
——————–